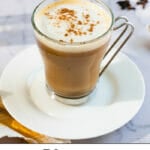 Here’s how to make a vegan chai latte as good as a coffee shop! There’s a secret to getting the perfect foam topping with dairy free milk.

A great chai latte doesn’t need dairy milk. Meet the perfect Vegan Chai Latte! It’s warm and cozy spiced, lightly creamy with a fluffy foam topping. And honestly, that’s a feat! Dairy free milks can act more like water than milk. So this vegan latte: it’s a revelation! It’s just sweet enough with the perfect intrigue from the chai spices. It’s much lighter than a typical latte, so you don’t feel like you just ate a bowl of ice cream. Here’s the trick you need to know to make a vegan chai latte!

How to make a vegan chai latte: the secret!

So what’s a chai latte, anyway? The chai latte is a cultural fusion: it combines traditional masala chai, a milky spiced tea from India, with frothy steamed milk of a cafe latte. This started to become popular with second wave coffee shops in the 1990s (read: Starbucks). Most coffee shop versions of chai have little left of the traditional Indian tea, making it too sweet with too many spices.

This vegan chai latte is just sweet enough, and gently spiced with a blend of chai spices. Even better, you can get that beautifully frothy top! Most vegan chai latte recipes simply add coconut whipped cream to the top as a faux foam. But this recipe actually works! The secret? Oat milk.

What’s the best milk for a vegan latte?

We’ve done the research so you don’t have to! What’s the best milk for a vegan latte? Regular oat milk. Here’s why:

Oat milk is becoming easier to find and a more popular dairy free milk. Make sure to buy unsweetened oat milk: it has the best flavor. Plus, we’ll be adding sweetner…

The sweetener for a vegan chai latte: maple syrup

This chai latte recipe is intentionally just sweet enough: it’s not a copycat Starbucks recipe that’s packed full of sugar! But don’t worry: it’s sweet enough that it tells your taste buds that it’s a chai latte! Here are a few notes on the sweetener to use for a chai latte:

The word chai translates to “tea” in Hindi, so saying chai tea is technically like saying “tea tea.” The more correct term for the Indian tea blend is masala chai. The word masala refers to a blend of spices used in cooking. Just like the word curry, a Westernized reduction of a complex blend of Indian spices, the word chai can oversimplify and appropriate a rich Indian cultural tradition.

Masala chai spices can include many different ingredients based on the cook, just like curry powder. This Homemade Chai Spice mix uses common chai spices, but note there are many more used regionally in Indian blends. Here’s what you’ll need for the chai spices:

Traditionally, whole spices are simmered with water and tea to make make masala chai: like whole cinnamon sticks and cloves. This chai spice blend is a shortcut by using ground spices that you might already have in your pantry. It makes the process quicker and easier, and also lets you use the leftover spice blend for baked goods like cookies and muffins.

How to froth milk for a vegan chai latte

Here’s the thing: frothing milk for a vegan chai latter is a little different than with dairy milk. The main difference? You can over-froth the oat milk. That’s right: if you froth too much, it will deflate. Keep in mind that the foam is not quite as creamy as you get with 2% or dairy milk, because there’s less milk fat. Here’s what to know about how to froth non dairy milk:

Want a regular latte with dairy milk? We got that too. Go to Perfect Chai Latte.

And that’s it! Make your masala chai (see below), then mix in that frothed milk. You’ve got a beautiful vegan chai latte with actual foam, thanks to the oat milk! No need to make extra vegan whipped cream. We like to add a sprinkle of chai spices on top as a finishing touch.

*Want to make vegan chai lattes to order throughout the week? Make a big batch of the spiced tea and refrigerate. When you’re craving a latte, warm up ¾ cup of the tea, then froth the ½ cup milk.

Here’s how to make a vegan chai latte as good as a coffee shop! There’s a secret to getting the perfect foam topping with dairy free milk.

*You can skip straining if desired: the spices will settle to the bottom of the drink.

Here are a few more vegan drinks that are perfect for cool weather! Make sure to try: